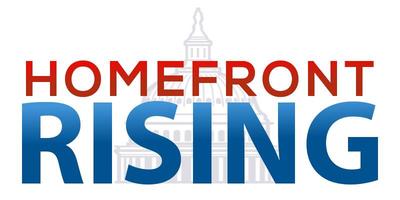 Thank you for joining us on May 8th for a discussion of military spouse voting – past, present, and future. If you missed the live event, you can still catch the replay here:

Homefront Rising is a non-partisan initiative that encourages and trains military spouses to speak up and get involved in the political process through advocacy and public service.

At the heart of the mission is the desire to empower members of the military community to make positive change for military families. We have become adept at calling on Congress and our elected officials to demand that they meet the needs of those who serve. But we also need members of our own community among the elected officials making decisions that affect it.  It is time for the homefront to rise! It will no longer just be “call your representative” – military spouses will be the representatives! Homefront Rising wants to help empower military spouses to take the skills learned from supporting the homefront to Capitol Hill, city hall, and state houses across this country.

Past events include full-day seminars in Washington, D.C. and Tampa, FL, and panels in San Diego and Seattle.

Tired of Being Ignored by Washington, Military Families Are Taking Charge in Washington

Homefront Rising – Why Military Spouses Should Get Political

Homefront Rising – Who Runs the World?

Choosing to Engage, Advocate, Empower, and Act as a Military Spouse