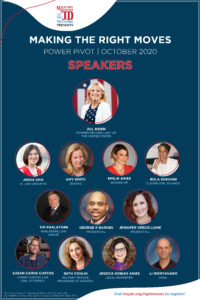 To say that the MSJDN’s 8th Annual “Making the Right Moves” (“MRM”) Conference was a success would be an understatement. Based on our overwhelmingly positive feedback, this latest edition may have been our best yet! In the words of MSJDN’s Community & Events Director and MRM’s chief organizer Michelle Richart: Our conference was like “none other,” because “this year has been none other.”

Indeed, the MRM 2020 Conference, fittingly titled “Power Pivot,” was not only the first to have been held entirely virtually, but it was also our most attended ever! We had over 100 participants from all over the country, ranging from students to experienced professionals, both within and outside the legal field. Of course, all this would not have been possible without our amazing group of sponsors, who graciously financed multiple scholarships for attendance, and made sure that our participants receive bags full of amazing swag. With that, our biggest thanks go to: Amazon, TCDI, Prudential, USAA, Linkedin, Parlatore Law Group, Law Clerk, Mothers Esquire, and Perkins Coie. Also, MSJDN would like to thank Emilie Aries, founder and CEO of Bossed Up, who was absolutely instrumental in putting together this year’s MRM conference.

Our program was split into six 1-hour sessions throughout the month of October. One of the best things about the event being virtual was that we had the opportunity to record each session and provide links to the recordings to all attendees, so they could watch the sessions at their own leisure. This added benefit not only proved particularly helpful for those who had scheduling conflicts, but it gave participants an extra opportunity to re-watch the sessions and make a note of important information that was shared, or perhaps, find some inspiration in time of need. 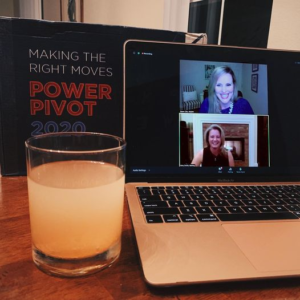 The Welcome Reception was held on October 1. Michelle Richart made opening remarks and kickstarted the event with a toast, raising her glass to all “fearless military spouses” in attendance. Beth Conlin, a co-host sponsor of Power Pivot 2020, fellow military spouse, and a senior program manager of Military Spouse Programs at Amazon, also made an appearance to discuss Amazon’s commitment to recruiting more military spouses. The highlight of the evening was our Fireside Chat program – a Q&A session between Dawn Gile, MSJDN’s current President, and Amy Smith, Chief of Staff of Boeing’s Government Operations department, and wife to the current Master Chief Petty Officer of the Navy. Amy discussed the unique challenges of pursuing her own career, progressing from a Congressional staffer to a director at one of the biggest corporations in the country, while also being married to a senior enlisted leader. She stressed placing importance on your career as well and how that may be challenging in a military environment where military spouses historically did not work.

Our second session, titled “Pivot Your Career: Making Progress amid Career Uncertainty,” took place on October 6. Hosted by MSJDN’s State Licensing Director, Nicolle Vasquez Del Favero, and moderated by Emilie Aries from Bossed Up, this event featured a panel of great speakers, including Jeena Cho, a bankruptcy attorney and co-author of the book “The Anxious Lawyer;” Tim Parlatore, founder and Managing Partner of Parlatore Law Firm; and Jennifer Vercellone, Vice President of Corporate Counsel for Prudential Financials Technology Law Group. The panelists discussed various topics such as navigating a career transition; working remotely during the pandemic and beyond; and ways to prepare for your next pivot. All panelists provided helpful insight and offered advice on dealing with specific issues of concern to military spouses and legal professionals, including how to overcome the dreadful “imposter syndrome.” 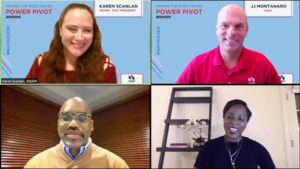 On October 8, we had our third conference event called “Pivot Your Personal Finances: How to Prepare for the Unpredictable.” MSJDN’s Immediate Past President Karen Scanlan opened up the session by introducing Janet Hamilton, Director of Legal Process at TCDI – one of MSJDN’s biggest supporters and a sponsor to this year’s MRM conference. Janet gave a brief overview of TCDI’s Military Spouse Managed Review program (MSMR), which is a remote program connecting qualified legal professionals around the country with contract and full-time document review positions. On our formal panel, we had JJ Montanaro, a retired U.S. Army veteran and a Certified Financial Planner with USAA’s Military Affairs’ Advocacy Group; Bola Sokunbi, a Certified Financial Education Instructor, best-selling author, and the founder and CEO of Clever Girl Finance; and George Barnes, Financial Advisor with Prudential Financials. The panelists took questions from Karen and the audience, sharing their knowledge on best financial management practices, paying off debt, and managing an investment portfolio. One important tip that George shared with the attendees was: “Not everyone needs a financial planner, but everyone needs a financial plan.” 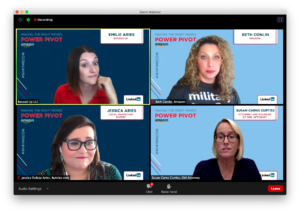 The fourth event, held on October 14, focused on the very important topic of networking and was titled “Pivot with Your People: How to Leverage Your Network when Making a Change.” MSJDN’s Treasurer, Sara Morgan, began by introducing Sarah Roberts on behalf of our co-sponsor Linkedin. Sarah shared her personal story as a working woman and a mother in the tech world, and highlighted the impact that networking had had on her own career. Emilie Aries then opened up the panel discussion, featuring Susan Carns Curtiss, an attorney and founder of Girl Attorney; Jessica Aries, legal marketing expert; and Beth Conlin from Amazon. Attendees received a lot of valuable advice. For example, Beth reminded everyone to think broadly about their own network and not underestimate the opportunities to network at places like gyms or churches. Susan recommended connecting with people who share our common interests. And Jessica shared her “secret weapon” of networking – commenting on others’ social media posts as a way to start a conversation.

On October 20, we had a workshop called “Pivot Your Way: How to Navigate Negotiation Now.” Sarah Ahn, MSJDN’s Director at Large, opened up the event by sharing her own perspective on finding one’s professional worth. Sarah also introduced Kristin Tyler, one of the founders of Law Clerk – a website designed to connect solo practitioners and small law firms with qualified freelance attorneys, allowing them to provide better work product while keeping their costs low. The rest of the session centered around Emilie Aries who walked the attendees through the process of mastering a successful negotiation for a new job, raise, or promotion. One of the key takeaways from her presentation was that asking for higher pay is not just about money; it shows that you have self-respect, you are a good advocate, and you expect to be respected. As an additional bonus, all attendees received a special handout including a free copy of “Bossed Up’s Definitive Guide to Negotiating as a Woman.” 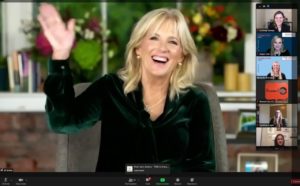 Our Closing Ceremony took place on October 21. MSJDN President Dawn Gile delivered the opening remarks, during which she reflected upon the conference itself and more broadly, on the role of MSJDN in helping and empowering our community. Following Dawn’s remarks, MSJDN’s Community & Events Director Michelle Richart introduced our remarkable keynote speaker, Dr. Jill Biden. A daughter of a World War II veteran and mother to Beau Biden, who served in the National Guard prior to his untimely death, Dr. Biden proudly declared her lifelong support for military families and veterans. She specifically expressed her admiration for the incredible strength of military spouses who serve every day through supporting our servicemembers; parenting for two; organizing birthdays and special events; volunteering in our communities; and reminding us that “the heart of this nation still beats with kindness and courage.” As a final remark, Dr. Biden thanked everyone for their service and expressed her commitment to military families by supporting initiatives focused on reducing military spouse unemployment, expanding licensing accommodations, and ensuring that schools are capable of supporting our military children. The conference was formally concluded by MSJDN President-Elect Kristen Jones, who delivered a closing address before breaking the attendees into smaller groups for our final “Community Conversation” program.

While the 2020 Making the Right Moves conference may be history, we hope that its impact will continue to live on as our participants implement the strategies learned during the sessions to pivot their own careers. If you would like to share your story, or give us feedback on how to make our next year’s conference bigger, better, and even more impactful, please reach out to us at: events@msjdn.org