On June 6, 2019, the Supreme Court of Washington issued an order amending Admission and Practice Rules (APR) 3 to create a pathway to practice law for attorney spouses of active duty military personnel stationed in the state. The amendment goes into effect on September 1, 2019. 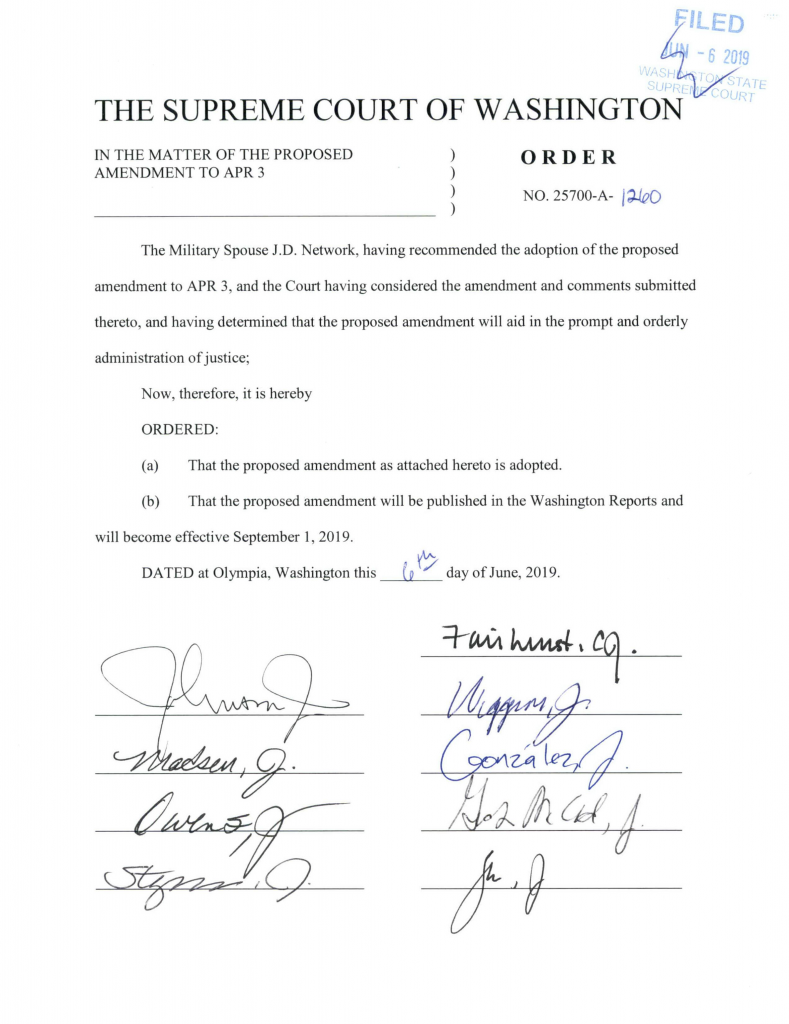 This new licensing option is available for attorneys already licensed in another U.S. state, territory, or the District of Columbia, and who reside or intend within the next six months to reside in Washington as a spouse of a member of the United States Uniformed Services. Applicants are eligible for this option only if they do not qualify for other methods of admission by motion under APR 3. There is no time limit under this rule; military spouse attorneys are permanently admitted to the Bar with full rights and privileges alongside their peers.

“I’m incredibly proud of the newest military spouse attorney licensing rule,” said past MSJDN President Libby Jamison, who led the rule change efforts in Washington. “As a Washington resident and Bar member, I’m thrilled that my home state is committed to supporting military spouses in the workforce.”

With this amendment, Washington becomes the 38th jurisdiction to enact a licensing accommodation for military spouse attorneys. Once the order is processed by the Reporter of Decisions and the publication editor, it will be posted on the Supreme Court’s website under the “Rules Adopted but not Yet Effective” page.

“This amendment to APR 3 is a practical solution that reduces a significant burden for military families,” said Military Spouse JD Network (MSJDN) President Karen Scanlan. “After many years of hard work by the MSJDN state licensing committee, military spouse attorneys can now continue a legal career while serving alongside their servicemember in Washington.”

After advocating within the Washington legal community for many years, MSJDN approached the Court directly in Fall 2018 to put forward a proposed amendment. MSJDN thanks the Supreme Court of Washington for their swift action on the proposal in support of career-minded military spouses. MSJDN is also grateful to the many supporters of this rule change, including Washington Women Lawyers and Bill Hayden, a Navy veteran and Microsoft attorney.