Homefront Rising is an annual non-partisan conference that encourages and trains military spouses to speak up and get involved in the political process through advocacy and public service. This year, the Military Spouse J.D. Network partnered with Veterans Campaign for Homefront Rising 2019, a Women’s Leadership Symposium designed specifically for military spouse and veteran women interested in public service careers. On May 10th, military spouses and veterans from across the country will gather in D.C. for a day of civic leadership training.

MSJDN is thrilled to announce the Title Partner for Homefront Rising 2019 – the National Military Family Association. The Association has been the voice of military families for 50 years, standing behind service members, their spouses, and their children. In 1969, the Association was founded by a handful of military wives who wanted to make sure their widowed friends were properly cared for.  Two short years later, the Survivor Benefit Plan became law, and the Association has been hard at work ever since. A small, but determined, group of spouses around a kitchen table expanded into a strong force of military families representing all ranks and services. There’s no better example of Homefront Rising than the story of the military spouse advocates behind NMFA!

NMFA works on a wide range of issues related to military families, including barriers faced by military children in the classroom. In 2017, NMFA was approached by the Bill and Melinda Gates Foundation, who has been working for years to highlight the importance of high and consistent academic standards in our country’s public schools. While this is an issue that affects students across the United States, it has a disproportionate impact on mobile populations – like military families – who move frequently. With this in mind, NMFA partnered with the Gates Foundation to raise awareness of how the education of military- 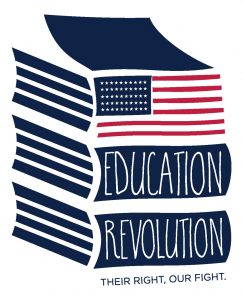 connected kids can be affected when states have different academic standards. The Education Revolution initiative educates those who want to speak up and become effective advocates for military children’s education.

NMFA traveled to Virginia, Texas, and Florida to meet with  local military families and education leaders and discuss issues and challenges. They held two family retreats and one full-day training event focused on helping families understand the tools and resources available to support military parents and children on education-related issues. They surveyed military families about the experiences with public schools and created a brochure to share with policymakers at all levels. NMFA also created a free Education Revolution kit containing resources for parents, teachers, administrators, and state/local school officials.

Now, NMFA is bringing their expertise to educate Homefront Rising attendees through an Education Revolution workshop on May 10th. Through an interactive session led by Joyce Raezer, long-time advocate and champion of military families, military spouse and veteran attendees will learn how to comprehensively assess an issue, identify barriers to success, and affect change through the lens of military kids’ education. Advocacy is at the heart of political engagement and attendees will leave equipped with the tools to be better parents, educators, advocates, and public officials.

Save your seat for Homefront Rising 2019!

Why: Because military spouse voices matter!

Attendees have the option to attend May 10th, as well as a full Veterans Campaign Introductory Campaign Training Workshop on May 11-12th.