MSJDN members are well aware of the challenges associated with continuing their legal careers while accompanying their service-member spouses from state to state and across the world.  One of the biggest hurdles they face is the process of becoming licensed in a new state, which often requires studying for another bar exam and completing a lengthy and expensive application, only to move again in a few years.  That is why MSJDN members are so appreciative when state bars adopt membership rules tailored to military spouse attorneys.  These accommodations enable military spouse attorneys, such as MSJDN member Evelyn Guevara, to hit the ground running in a new state to further their legal careers and enrich the state bar with their unique talents and skills. 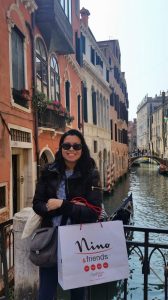 Evelyn’s husband is currently serving in the United States Air Force JAG Corps.  Together they have been stationed in Arizona, New Mexico, Washington, DC, Colorado, and Italy.  After getting married in 2007, Evelyn, a New York barred attorney, moved to Arizona to join her husband at his first duty station.  Even though she was only going to be in Arizona for two years, Evelyn studied for and passed the Arizona bar exam while completing a federal judicial clerkship.  Upon completion of the clerkship, Evelyn worked in private practice for her remaining year in Arizona.

When her husband received orders to New Mexico for what was anticipated to be another two-year assignment, Evelyn decided against studying for a third bar exam and instead chose to pursue other opportunities and start a family.  The New Mexico assignment ended up lasting four years, during which time Evelyn worked as a paralegal and had two children.  Next the family was off to Washington, DC, for a ten-month assignment.  Although Evelyn was ready and excited to work, the short nature of her husband’s tour did not provide sufficient time to fully connect with the legal community and find employment.  Instead, Evelyn focused on raising her children and got involved in MSJDN and other volunteer and pro bono opportunities.

In July 2014, Evelyn’s family moved to Colorado Springs on orders for a two-year assignment.  At the time, a military spouse rule change (requested by MSJDN) was under review by the Colorado bar, and the rule was adopted shortly thereafter, just in time for Evelyn’s arrival.  The Colorado rule became effective on September 1, 2014, and Evelyn immediately applied for membership.  Evelyn remembers that Colorado’s application process could not have been easier.  She simply completed an abbreviated application, paid a fee, and submitted letters of good standing from the New York and Arizona bars.  Just a short time later, on September 25, 2014, Evelyn was admitted to the Colorado Bar.

The Colorado Bar’s military spouse rule granted Evelyn full, active membership in the state bar, with all of the associated privileges and responsibilities, during her time in Colorado.  Evelyn was obligated to satisfy continuing legal education requirements and pay the annual fee for active membership.  In return, she was able to seek employment in the local legal community as an active member of the bar, without restriction.  Upon leaving Colorado for her husband’s next assignment, Evelyn simply needed to notify the bar of her move, and her membership would be terminated.

Evelyn’s Colorado bar membership opened up a window of employment opportunities, and she began her job search in earnest.  Through an MSJDN connection, Evelyn ended up accepting an attorney position with the Office of the Staff Judge Advocate at nearby Fort Carson, which ironically did not require a Colorado bar license.  Nevertheless, Evelyn is appreciative of Colorado’s support of military spouse attorneys and the ease with which she was able to obtain and maintain her Colorado license during her husband’s assignment.  Evelyn recalls the Colorado bar being very welcoming of military spouses utilizing the new licensing accommodation.  For Evelyn, her Colorado membership “legitimized [her] in a community where she had never lived or practiced.”  Such legitimacy is crucial in tight-knit legal communities, and it can often be a significant barrier for military spouse attorneys.  Colorado removed that barrier for Evelyn and for all other military spouse attorneys, and MSJDN is thankful for the bar’s support.