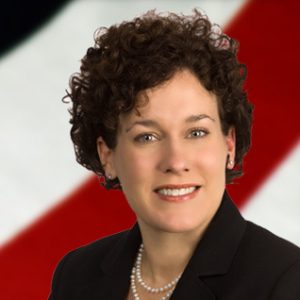 After graduating from The University of Alabama School of Law, Mary Scott was commissioned as a United States Air Force Lieutenant and began her active duty service as an Air Force Judge Advocate General. While on active duty, Mary Scott met her husband, a then-active duty United States Air Force F16 fighter pilot, and the pair became a successful dual-military couple. When the couple’s military demands began to conflict with the needs of their growing family, Mary Scott decided to use her husband’s tour at an overseas duty station to switch to the Air Force Reserves as a medical law consultant. This move allowed her to spend more time with her first child while still maintaining her legal skills.

Mary Scott believes that it is important for military spouse attorneys to get creative and do what they can to keep their resume on “life support,” if necessary, throughout the inevitable moves and changes that come with the military lifestyle. This can be done through telecommuting, teleworking, working as an independent contractor, or even volunteering. According to Mary Scott, the most important thing is not to give up on doing some sort of direct work in your career field. Without it, returning to the workforce, whether by choice or circumstance, will be that much harder. Mary Scott stressed that military spouse attorneys should consider serving in the Reserves or the National Guard as a way to stay connected to the professional community. The Reserves and National Guard are a great source of extra income, and there is generally plenty of temporary work available. Indeed, the Air Force Reserves provided these benefits to Mary Scott while allowing her the time and flexibility to focus on her family.

In 2006, when Mary Scott’s husband was approaching his ten-year mark in active duty service, the couple made an intentional decision to leave military service and return to Alabama. They had specific goals for ending their active duty service­—join the Alabama Air National Guard to provide extra income during the transition, find private employment, and start their own company—and took concrete steps to put their plan into action. While still on active duty, Mary Scott’s husband started developing the ground work for a company, and Mary Scott learned the legal requirements for forming a company in Alabama. Then Mary Scott and her husband secured positions as a JAG and F16 pilot with the Alabama Air National Guard, which gave them income and stability during the transition to civilian life. Stepping outside of her comfort zone, Mary Scott’s first civilian job back in Alabama was as a workers’ compensation attorney, an area of law in which she never thought she would practice. However, her experience in the Reserves as a medical law consultant proved useful to the position.

Mary Scott’s advice to other military couples is to take the time to consider and plan your military career trajectory, rather than letting your career happen to you. From her perspective, the ten-year mark of active-duty service is a crossroads for military couples, and the decision to return to civilian life or continue toward military retirement should be an intentional one. Then you can set goals as a couple that fulfill both of your career needs and begin tailoring your career opportunities to meet those goals and soften your imminent or eventual return to civilian life.

In 2010, after she was established in Alabama, Mary Scott broadened her horizons again and ran for political office, getting elected to the Alabama State Board of Education. For Mary Scott, the same sense of commitment to a cause she felt serving in the Air Force is what motivated her to seek a position as Representative to the State Board of Education. Mary Scott’s dedication to education in Alabama led to her reelection to the Board in 2014. Mary Scott encourages other military spouses to seek political office because of their similar commitment to a cause and love of country. According to Mary Scott, voters can sense this commitment and appreciate a candidate’s connection to military service and the personal sacrifices made for that service. Moreover, Mary Scott noted that military spouses have unparalleled organizational skills, which is a tremendous asset when running a political campaign.

In 2012, Mary Scott’s professional perseverance paid off when she joined Intuitive Research and Technology Corporation, a small engineering services company that works extensively with the military. Mary Scott advises and leads the company’s business interests in Compliance, Ethics, and Risk, and her work capitalizes on her background as a JAG and military spouse. Additionally, Mary Scott manages the company’s military lobbying efforts and participates in political outreach because, as a former JAG and military spouse, she is able to speak the military language effectively.

For other military spouse attorneys returning to the work force, PCS’ing to a new legal market, or transitioning to civilian life, Mary Scott encourages you to keep your resume going and prepare to face some difficulty and disappointment. However, with the same hard work and intentional planning that Mary Scott has exhibited, you can also anticipate a certain amount of luck. Like Mary Scott, MSJDN members could serve in the Reserves or National Guard, find fulfillment in an unexpected legal field, successfully run for public office, or secure a position where their military connection is seen as an asset, rather than a liability. Thank you, Mary Scott, for your perspective and insight!