Unlike many other U.S. jurisdictions, licensing accommodations for the practice of law in Michigan must go through the legislature rather than the judiciary. MSJDN’s previous success in its efforts to achieve adoption of licensing accommodations has come in many varieties and often takes “a village” of driven military spouse attorneys and their networks to reach the finish line.

The Michigan success started with a cousin.  Michigan State Representative Robert Wittenberg is the cousin of MSJDN member Lauren Wittenberg.  After Lauren shared the MSJDN’s mission with her cousin, he agreed without hesitation to take on our cause in the state of Michigan.  Not only did Representative Wittenberg introduce and sponsor two bills to enact a licensing accommodation for military spouses stationed in Michigan, he personally shepherded those bills all the way to the Governor’s desk for signing. 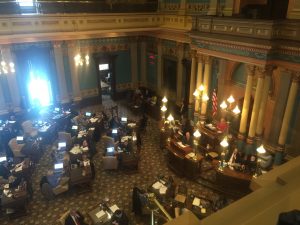 While Representative Wittenberg was busy shepherding these bills through the legislature, I was scheduled for an interview for a feature in the Michigan Law School Alumni magazine, the Quadrangle, regarding MSJDN and my efforts in Illinois to support a military spouse licensure accommodation (now Illinois Supreme Court Rule 719).  As part of this process, I reached out to MSJDN leadership to inquire as to any efforts in Michigan I might credit in my interview. I immediately agreed to Karen Scanlan’s request to testify to the Michigan Senate Committee on the Judiciary in support of both bills.  On December 8, 2016, I traveled from Chicago to Lansing to provide my testimony in support of the bills in the midst of an awful blizzard.  But it was the opportunity of a lifetime and all the best of #whyiMSJDN. 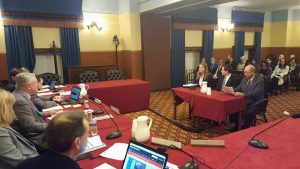 Angela Allen testifying before the Michigan Senate Committee on the Judiciary

The bills unanimously passed the Senate on December 14, 2016 and were signed by Governor Snyder into law on January 4, 2017.

Thank you to everyone involved at each step along the way on this incredible effort. Military spouse attorney Jocelyn Benson first brought the issue of military spouse law licensing and MSJDN’s national efforts to the Michigan legal community while she was Dean of Wayne State Law School; MSJDN is grateful for her leadership. We especially thank Lauren Wittenberg Weiner for putting MSJDN in contact with Representative Robert Wittenberg, and for Representative Wittenberg and his amazing Legislative Director Barbara Winter who coordinated with MSJDN and worked tirelessly on behalf of these bills.  Our thanks extend also to the support of the many co-sponsors including Representative Maturen, and the honorable Justice Zahra.

If you are stationed or live in a jurisdiction that has not yet adopted a rule for licensure accommodations for military attorney spouses and you think you might be able to make a difference or join a team, contact Karen Scanlan at statelicensing@msjdn.org.