Earlier this year, the Military Spouse JD Network put out a call for nominations for the 2016 MSJDN Exceptional Service Award to recognize a member for demonstrating an unwavering commitment to the legal profession and going above and beyond the call of duty to serve others. Many deserving military spouse attorneys doing incredible work in their communities and workplaces were put forth as candidates. However, one nomination stood out in the crowd.

Janet Arnott, a Marine Veteran spouse and law clerk at the Law Firm of Byrd & Byrd, LLC, in Maryland, was described in her nomination as going “above and beyond to serve others, especially those in the military community in need of legal assistance.” Janet’s long history of service began in law school at the University of the District of Columbia David A. Clarke School of Law, where she was a founding member and officer of the Veter 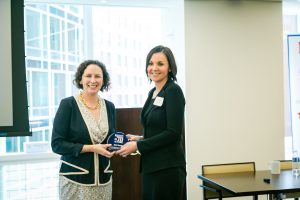 ans Legal Services Program and volunteered with the Government Accountability Project Clinic, assisting in the clinic’s work representing whistleblowers. After law school, Janet continued her service work by seeking admission to practice before the United States Court of Appeals for Veterans Claims and providing pro bono representation before the Court through the Veterans Consortium Pro Bono Program. Janet’s nominator described her as “a wealth of knowledge on veteran benefits” who is “always willing to share her knowledge and insights” with others.

Beyond her pro bono representation of veterans, Janet has lent her talents and expertise to the Maryland State Bar Association, where she serves as Secretary of the Veterans’ Affairs and Military Law Section, as well as on the Legislative Subcommittee. In these roles, Janet is actively engaged in promoting veterans and military spouse licensing issues by writing articles for the bar journal and working with various organizations in the Maryland community to expand Veterans’ Treatment Courts and better serve veterans in the legal system. Janet has also volunteered with the Tragedy Assistance Program for Survivors (TAPS) Good Grief Camp and the American Bar Association’s Military and Veteran Legal Summit, and she frequently contributes to MSJDN by sharing her expertise on veterans’ law and organizing events in Maryland for fellow MSJDN members.

Janet was described in her nomination as “a force to be reckoned with, from chasing down the Under Secretary of the Army to advocate for a wounded warrior to volunteering with the Junior League, MSJDN, and the Maryland State Bar, she goes above and beyond to serve others in her community.” When asked why she gives so much of her time to helping others, Janet stated, “It’s important to me to volunteer because I want to make sure the issues faced by families like mine are heard and addressed. That I do my part so that wounded service members and military caregivers going forward face fewer obstacles, receive more support, and are better understood by their community.”

MSJDN is thrilled to recognize Janet’s formidable volunteer spirit and tireless efforts on behalf of military families with the 2016 MSJDN Exceptional Service Award. Thank you, Janet, for representing the military spouse attorney values of excellence and service through your dedication to aiding those in need.  Please join us in congratulating Janet on this recognition!