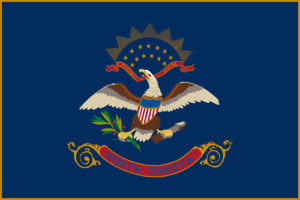 To qualify for temporary licensure under North Dakota’s Rule 3.3, the military spouse attorney must be licensed and a member in good standing in another jurisdiction and join their spouse pursuant to PCS orders in North Dakota.

MSJDN North Dakota State Director, Elizabeth Hancock, initiated efforts for the licensing rule last year. The Supreme Court of North Dakota’s Joint Committee on Attorney Standards proposed the rule on May 25, 2016, and the proposed rule was submitted for comment on June 2, 2016.

When the North Dakota Supreme Court convened September 1, 2016, Justices VandeWalle, Sandstrom, Kapsner, Crothers, and McEvers, directed the Clerk of the Supreme Court to enter the order adopting the rule.

“The new military spouse rule amendment allows for my husband to remain on track in his career and for me to practice law [in North Dakota] without having to go through the stress and time commitment of passing another bar exam,” said Hancock. “This is huge when we are only stationed somewhere for two to three years.”

The petition submitted for consideration of the proposed rule cited the efforts of MSJDN and the ABA to accommodate the military spouse attorneys who move frequently in support of the nation’s defense. See the petition here.