Rule 712A goes in to effect on September 15, 2016, and will allow an attorney who has been admitted to practice law in another state or the District of Columbia, and who is married to a military service member stationed in Kansas, to be admitted to practice law in the state without the need for an additional bar exam. They must be employed as an attorney by or with an active Kansas attorney in good standing to qualify under the rule. 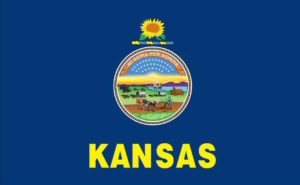 In a press release from the Kansas Supreme Court, Chief Justice Lawton Nuss said, “Spouses of military personnel often make tremendous career sacrifices to support their loved ones in uniform. As a Marine Corps veteran myself, I’m especially pleased the Kansas Board of Law Examiners proposed this rule so our state can further demonstrate its support of the men and women who pledge their lives in service to our country.”

The rule grants a military spouse attorney license as long as the attorney resides in Kansas, remains married to the military service member stationed in the state, and continues to be employed as an attorney by or with an active Kansas attorney in good standing who will have ultimate responsibility for clients.

The application form for temporary admission under the new Rule 712A will be available on the the Kansas Judicial Branch website on  September 15th under the Appellate Clerk clerk tab with the Board of Law Examiners information.

In February 2012, the ABA House of Delegates adopted a resolution supporting changes in state licensing rules for military spouses with law degrees. In 2014, MSJDN proposed a rule based upon that resolution to the Kansas Supreme Court. The Court and the Kansas Board of Law Examiners accepted public comments and thoroughly vetted the proposed rule prior to its adoption on September 2, 2016.

MSJDN is grateful for the support of the Kansas Supreme Court, Board of Law Examiners, and greater legal and military communities.  “Reducing barriers to licensing and employment will have a meaningful effect on military families in Kansas,” said MSJDN President Josie Beets. “Our communities can only be made better through the contributions of these amazing military spouse attorneys eager to serve.”