MSJDN members are no strangers to the bar exam. The vast majority of MSJDN members have taken and passed at least one, and over a third have taken multiple bar exams. Some have even taken the bar exam five or more times. As for me, I just took (and passed) my third bar exam. It will be my fourth license to practice law, and while I haven’t been able to bring myself to do the exact math yet, I’m pretty sure it will push my mandatory bar dues over $1,000 annually. Again, I am not alone. More than a quarter of MSJDN’s most recent survey respondents reported paying more than $500 per year in annual mandatory bar dues. This post is for all of you who find yourself studying for the next administration of the bar exam, facing the prospect of ever higher annual bar dues, or thinking ahead to your next PCS to determine whether it might bring with it the prospect of yet another bar exam. 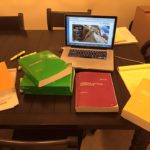 I have studied for three different bar exams at three very different points in my life. The first – Georgia – was right after law school. That was perhaps my most “traditional” bar study experience. The summer after graduation, I attended the bar preparation courses in person at my law school in Atlanta. I had started training for my upcoming job, but for the most part, I was able to study full time. Of course, the hours upon hours of preparation did little to calm my nerves in the final weeks, days, hours (I’m not ready! I just need a little more time to study!) before the bar exam. But I had largely followed the study plan, and I passed on my first attempt. I happily began my job clerking for a United States District Judge, and five months later I found myself engaged to a United States Sailor.

Ready to swear in to the Florida Bar

With my engagement came preparations to move to Florida where my service member was stationed. I often remark that I have taken my bar exams in precisely the wrong order, and this was a case in point. Florida has no reciprocity with other jurisdictions, and unlike some states (including Georgia), has no attorney’s exam. Thus I began preparations to take the bar exam – MBE included – again. This time, however, I was working full time. I also got married about six weeks before the exam. Somewhere in the midst of working and wedding planning, I re-compiled all that character and fitness information, squeezed in a fingerprinting appointment during a trip to Florida to visit my fiancé, and registered for another exam and another bar review course. This time, I chose to do an online only review course, since I would be living in Atlanta while preparing for the Florida exam. My husband and I were not able to take a honeymoon due to both of our work schedules (…and my bar prep), so two days after we got married, he returned to work in Florida, I returned to work in Atlanta, and I began studying for the bar exam every evening. In retrospect, I was lucky because my hours at work were predictable and manageable, I was living alone with only my cat to take care of, and the Judge for whom I worked took pity on me as panic set in, allowing me to use my lunch breaks to study and then to take a couple of days off before the exam. Two months after the bar exam, I moved to Florida to join my husband. Two months after that, he deployed and I began my first job in private practice.

Our next duty station was in northern Virginia, which I thought was great because I could – and did – waive in to the DC Bar. Fast forward a few more years and we got orders to Norfolk, which, among other qualities, is not within commuting distance to DC. And so I found myself registering for yet another bar exam and trusting my fate to another online only review course. This time I would get the pleasure of taking the full bar exam – MBE included – and the MPRE again, since it had been 8 years since I last took the MPRE. This time I was not working full time, but I was full time parenting a 2-year-old. So, I again studied in the evenings and on the weekends. Beginning the week of Christmas and through the exam in February, my husband and I saw very little of each other. If he was at work or traveling, I was full time parenting our toddler. If he was home, I was full time studying for the bar exam. Having studied for, taken, and passed bar exams as a newlywed, with a full time job, and with a small child, I have compiled a few tips, pitfalls, and words of wisdom that I hope will help those who find themselves in similar positions!

Starting to feel a little familiar…

First, do what works for you! This sounds intuitive, and all the bar prep courses will give you this advice. But, sometimes it’s easier said than done. For example, I’ve always been an outliner. In law school I would read my notes, re-read my notes, and make detailed course outlines. I would highlight and highlight again in as many colors as I could find, and I did well. It’s how I process information. Yet for some reason, this time around, I felt compelled to make flashcards. It seemed like everyone was making flashcards. So I spent a bunch of time making them, and I actually used them very little. I mostly caused myself undue stress feeling like I needed to do something because “everyone” studying for the bar was doing it. The truth is, if you’re studying for the bar exam, you’ve already survived quite a bit of schooling and test taking. You know how to study. You know what works for you. Please, don’t change it up now. Do – and trust – what works for you! 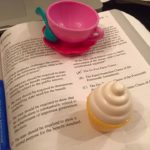 Second, do not underestimate this experience, and lean on your support networks! I will be the first to admit, I vastly underestimated how difficult studying with a young child would be. I had studied once before using evenings and weekends and thought it would be the same this time around. WRONG. I underestimated how exhausted I would be, how mentally taxing it would be, and how much of a toll it would take on my relationships. My husband could not have been more supportive, as I leaned on him like never before. By the end, I was starting to feel desperate. Sometimes, as military spouses, as lawyers, as type A personalities – chalk it up to whatever you like – we hesitate to ask for help, believing we should do everything for ourselves. But I needed help and realized I couldn’t do it on my own. I leaned on my friends, who stepped up like champions, letting me drop my daughter off for play dates every morning in the weeks immediately before the exam so that I could hole up in a Starbucks and study. I leaned on my family, asking my parents to come stay for a week so they could help with our daughter in the days immediately before the exam and stay with her while I had to travel to take the test. I even leaned on my social media networks. For me, as the bar exam draws ever nearer, comments like “I’m sure you’ll do fine!” start to wear on my nerves, particularly from those who have never experienced something like a bar exam. What makes you so sure?!, I start to scream in my head (and, occasionally, out loud). But as I vented on social media, the votes of confidence that started rolling in from law school classmates and former colleagues were a real and unexpected source of comfort for me. Don’t hesitate to lean on your networks for support. After all, wouldn’t you do the same for any of them?

Third, relax! OK, that might be asking a bit much. But, don’t let the exam itself intimidate you. People often ask me if I thought my second and third bar exams were easier. I do not. In fact, I thought my third was by far the most difficult. People wonder if I recalled the material from having studied in the past. I did not. If you’re anything like me, you experience an immediate brain dump upon completing the bar exam, after which you remember neither the material you studied nor the actual questions on the exam. I did not feel like having taken bar exams multiple times in the past gave me a substantive leg up. I did, however, sense a bit of a state-of-mind advantage. As I ate breakfast the morning of the first day of my second bar exam, I looked around the hotel restaurant. It was filled with bar takers frantically – and I mean frantically – reviewing flashcards, pouring over outlines, thumbing through review books. I smiled. I read the newspaper. I ate breakfast. I felt much more calm than most of the people I encountered that week. The exam itself – the huge convention center, the rows upon rows of tables, the security checks, the formalities – did not intimidate me the way it had the first time. So, even if you are a first time bar taker, don’t let the test itself psych you out. It is just a test. It’s a test a lot of other people are taking at the same time, and it’s a pretty important one, but it is still just a test. And unlike most you’ve taken before, you don’t even need to do well – you just need to pass. After having endured this whole process three times over now, I am firmly convinced that if you are calm and not intimidated by the bar exam testing process, you have already given yourself a significant edge.

And finally, don’t study immediately before the exam. This is a tip I picked up from the Senior United States District Judge for whom I clerked after law school, and I have carried it with me. Judge told my co-clerk and me that we could have the day before the bar exam off as long as we promised not to study and to instead do something that relaxed us – take a hike, play tennis, see a movie, he suggested, but do not study. I followed his advice (he’s a Judge – who was I to question his wisdom?). The day before my second bar exam, I was on a plane to the exam site. While I did review a few notes on the plane, I put the books away when we landed. I checked into the hotel, had a nice dinner and glass of wine with some friends, and went to bed early. And I followed pretty much the same routine the night before my third bar exam. I absolutely do not study on the night(s) in the middle of the exam. At that point, I feel it is truly too late to master new material, and last minute studying for something of this magnitude is more likely to confuse me more than anything else. So, for me, relaxation and rest are key immediately before the exam.

I hope this post will help some of you. Perhaps you will take some of these tips to heart. Perhaps reading it is just a nice way to procrastinate for a bit. Or perhaps you will just feel a sense of solidarity and take some comfort in knowing you are not alone on this journey. To everyone preparing for a bar exam – be it your first, your third, or a number you’d rather not admit – good luck!