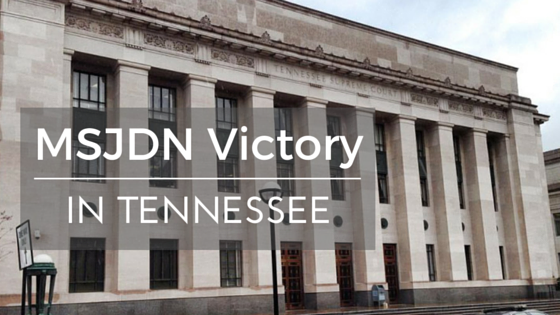 Military spouses who accompany their servicemembers to Tennessee or Fort Campbell, Kentucky, can acquire a temporary license to practice law in Tennessee under a new provision ordered this week by that state’s Supreme Court. The new rule, which goes into effect Jan. 1, 2016 as part of extensive changes to the licensing of lawyers to practice in Tennessee, was initiated by the Military Spouse JD Network in 2013.

“This change is significant to those who serve our country and whose families are impacted by their duty,” Tennessee Supreme Court Chief Justice Sharon Lee said. “And, because 95% of military spouses are women, this change will lend even more support to females in our profession.”

“The support the military spouse licensing accommodation rule received from the Tennessee legal community demonstrates the deep commitment this state has for the military community,” said Tennessee Director Johanna Thibault. “We celebrate this victory with our many supporters.”

Tennessee’s new provisions follow quickly on the heels of Kentucky’s decision to allow a similar accommodation for military spouse attorneys, providing families assigned to Fort Campbell (which straddles the Tennessee-Kentucky border) with wonderful career support in both states.

The final accommodation provided by the Tennessee Supreme Court allows a military spouse to practice on a temporary basis if they are:

The temporary license to practice law in Tennessee has an initial term of two years, but must be renewed on a yearly basis at the end of the initial two-year term. The license terminates when the servicemember is no longer on military orders for Tennessee or Fort Campbell (with an exception provided for unaccompanied tours). The initial application fee will be $375, and re-registrations will be $100.