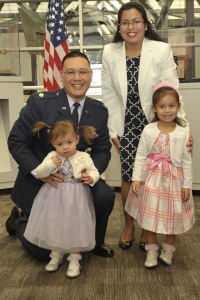 “This is amazing. A group that is sympathetic and understanding of what I am going through!” That was Evelyn Guevara’s reaction when she found Military Spouse JD Network (MSJDN) after googling “military spouse attorney.”

Evelyn met her husband in law school in New York, where she took and passed her first bar exam. Evelyn and Richard were married in 2007 while Richard was at his first assignment in Arizona for his duties with the United States Air Force JAG Corps. Like many other military spouse attorneys, Evelyn had to take another bar exam to continue her legal career, even though it was highly likely that they would be moving again. Evelyn obtained a judicial clerkship with the Honorable Sarah S. Curley at the U.S. Bankruptcy Court for the District of Arizona, and, after passing her second bar exam and being admitted in Arizona, worked for a bankruptcy law firm. However, only two years later, Evelyn and Richard received orders for their next assignment in Albuquerque, New Mexico.  Rather than taking yet another bar, Evelyn figured that her husband’s new assignment would be a good time to seek other opportunities and start a family. She obtained a part-time job as a paralegal with New Mexico Legal Aid and had two children.

Evelyn struggled with being out of the workforce and primarily being a stay-at-home mom. She could not do pro bono work without a license and found it difficult to find a job in the small New Mexico legal community. Evelyn started browsing for opportunities online and for people with out-of-state licenses. When she found MSJDN, she was relieved and excited. She threw herself into the group, not knowing how many doors would open for her as a result of her involvement.

After four years in New Mexico, Evelyn’s husband received orders to Washington D.C. for ten months. Evelyn was excited and ready to go to work, but knowing the assignment was so short, she chose to continue staying at home.  She became heavily involved in MSJDN, worked as a pro bono attorney with the D.C. Bar and volunteered with several other organizations, including the Navy-Marine Corps Relief Society.

The connections she made in D.C. through MSJDN led to several exciting opportunities. Mary Reding, past president of MSJDN, put Evelyn in touch with Judge Patricia Mille 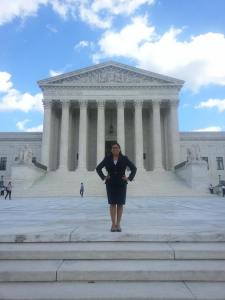 In July 2014, Evelyn’s family moved to Colorado Springs for her husband’s next assignment. A request for a rule change to allow military spouses to waive into the Colorado bar was already pending. The rule was under review, and Evelyn felt extremely fortunate to come into a situation where shortly after moving, the rule was adopted, making Colorado the 9th state to offer a military spouse attorney licensing accommodation.

The Colorado rule became effective on September 1, 2014, and Evelyn applied immediately for the Military Spouse Certification.  On September 25, 2014, less than a month after applying, Evelyn was admitted to the Colorado Bar! The process was very simple. Evelyn filled out the forms provided on the Colorado Supreme Court website and submitted them via mail, along with the necessary documentation, including certificates of good standing from the other jurisdictions where she holds a license and a copy of her husband’s military orders. Only a few weeks later, she received notice that her application was approved and she was admitted to practice in Colorado! Evelyn will also complete a required class on professionalism within 26 weeks of her admission to comply with the Military Spouse Certification requirements of Rule 204.4.

Evelyn had already begun looking for a job in the Colorado Springs area.  Fortunately, she received an unexpected call from the Office of the Staff Judge Advocate at Fort Carson inviting her in for an interview. The job was an attorney position, and Evelyn was thrilled. She was a bit surprised because she did not formally apply for the position.

In fact, the opportunity arose through her MSJDN connections.  One of the MSJDN members Evelyn met in D.C. was Ashley Ludovicy-Donahue, who works at the Pentagon for Jim Szymalak, Chief, Civilian Personnel Management (CCPM).  Evelyn had sent her resume to Ashley months before moving to Colorado to be placed in an attorney-spouse resume database.  When the Office of the Staff Judge Advocate at Fort Carson had the open attorney position, they asked the CCPM for resumes of available military spouses in the area.  The Office wanted to non-competitively appoint an attorney spouse according to the TJAG and DCP Sends, a message from The Judge Advocate General and Director, Civilian Personnel which outlines military spouse employment while also explaining military spouse hiring programs.  Ashley’s office passed along Evelyn’s resume, and following a successful interview, Evelyn was offered the job.

MSJDN members are all too familiar with the combined challenges presented by the military and legal worlds. The two universes do not usually mesh fluidly, making it hard for military spouse attorneys to sustain careers. However, by combining our networks and resources, we can turn challenging times into incredible opportunities, as shown by Evelyn’s story.

To learn more about the states that have made licensing accommodations for military spouse attorneys,  visit the MSJDN website. Becoming an MSJDN member provides you with a host of resources and support, including access to our private forums, where you can connect with other members and ask about anything from jobs and bar applications to the most comfortable shoes for work!