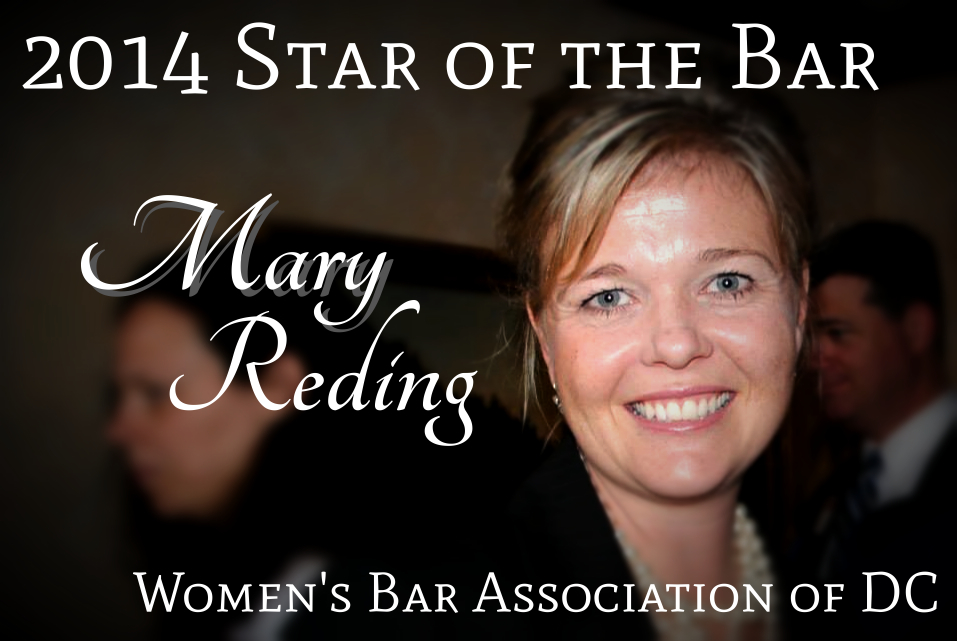 As part of its annual Stars of the Bar recognition, the Women’s Bar Association of the District of Columbia (WBA) has named Mary Reding Smith, Immediate Past President of the Military Spouse JD Network, a 2014 Star of the Bar.

The WBA theme for the 2014-2015 bar year is “Standing Together,” highlighting the importance of supporting all women lawyers throughout their careers. This year, they are honoring women leaders who epitomize this theme and have furthered the advancement of women in the profession. WBA will honor Mary at its September 18th Stars of the Bar Fall Networking Reception.

Mary’s passion for helping other military spouse attorneys comes to no surprise to MSJDN members and those who have met her. After founding the Military Spouse JD Network in 2011, Mary worked tirelessly to support her fellow military spouse attorneys. As President, she grew MSJDN from two members in Summer 2011 to over 1,000 in 2014, meeting hundreds of members in person along the way for coffee and mentorship. With early support from the American Bar Association’s Commission on Women in the Profession, Mary travelled far and wide to petition state licensing authorities to change rules to make it easier for military spouses to maintain a legal career. She made sure that national legal organizations like the American Bar Association and the Conference of Chief Justices knew the stories and sacrifices of military spouse attorneys. She built relationships with leading military non-profits like the Military Officers Association of America and the National Military Family Association to connect and support more military spouses.

The Stars of the Bar Fall Networking reception is the WBA’s largest no-cost networking event and kicks off the WBA’s program year. It is typically attended by more than 300 attorneys, including judges, law students, and leaders in the DC legal community. Stars of the Bar offers a professional and friendly environment to network with other attorneys, including WBA members and leadership. Also being honored at the reception are Honorable Ann Blackburne-Rigsby from the District of Columbia Court of Appeals and Leslie Thornton, Vice President and General Council, WGL Holdings, Inc. and Washington Gas.

If you are in the DC area, we encourage you to attend the Fall Networking Reception to honor Mary, MSJDN’s own Star of the Bar!