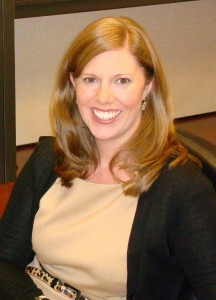 MSJDN is very pleased to congratulate member Erin Hennessy, recipient of the 2013 Professional Excellence Award, to be awarded at the Making the Right Moves Awards Luncheon in Washington, D.C., on May 22. The Professional Excellence Award recognizes a member making significant contributions to the profession, and to his or her practice area. Erin is an intellectual property partner in Bracewell & Giuliani’s Technology Group, focusing on trademark law, copyright law, and internet and social media issues in the media and telecommunications industries.

“Erin has proven that it is possible to excel in the legal profession while balancing the demanding requirements of military life,” says MSJDN President Mary Reding. “She gives all military spouse attorneys hope that through networking and hard work, it is possible to create a successful practice.”

Erin Hennessy knows about the high-paced, New York City-based lifestyle of in-house corporate counsel – she lived it. She spent eight years at Time Warner Inc., working her way up to become chief trademark counsel. That is, until she met Joe Davidson.

“He was home on leave from Iraq,” she explains. Joe was in the middle of a 15-month deployment to Iraq, but they kept in contact when his R&R was over. “We wrote to each other, email and snail mail,” she says. “He could call me occasionally.” When he came home, it was to his base, Fort Lewis, in Washington state, 3000 miles away. They dated cross-country, and in February 2008, Joe proposed. Erin quit her job at Time Warner, packed up her corporate lifestyle and moved to Seattle to start a new adventure as a military spouse attorney.

“The economy had just tanked, it wasn’t the ideal time to be looking for a job.” Through relentless networking, Erin discovered that a Seattle-based firm was looking to build its trademark practice. After two years in that position, she was recruited by Bracewell & Giuliani. “I told them I was an Army wife and could move at any time,” said Erin. “They were incredibly supportive, and responded by saying, ‘We have offices in many cities and we support the military.’” She tested that support only six months later, when her husband got orders to the other Washington (D.C.) to attend the National Defense University. She moved with him, but continued to serve as head of the firm’s trademark practice, travelling back to Seattle at least once a month.

She admits navigating a career while her husband continues his in the Army can be challenging, but Erin is also grateful for the experiences being involved with the military life has brought her. “One of the most gratifying experiences had been to support Wear Blue: Run to Remember as a pro bono client.” Wear Blue is a running community that honors the service and sacrifice of the American military. “I met the founder of Wear Blue, Lisa Hallet while my husband was stationed at Fort Lewis,” says Erin. “It is an honor and privilege to work with her and the Wear Blue team.”

Her tips to other military spouse attorneys? “Never under-estimate the value of networking! And always be networking! Don’t be afraid to ask people for help. And always follow-up if you don’t hear from the person you are trying to connect with. Chances are they are just busy but would be happy to help you.”

Join us for the Making the Right Moves Awards Luncheon on May 22 in Washington, D.C.